Way back in 2000 I interviewed Yoko Ono for The Bulletin. She had a sculpture in the Sydney Biennale. It was an installation made up of 100 pine coffins, each with a young tree growing out of a slot that had been cut out at eye level.

Back then I was living on my own in a run-down Art Deco flat in Petersham. I prepped for the interview by dutifully reading the books The Bulletin had provided for me, and listening to some of the music. Two Virgins, the album where she and John pose naked on the cover, was a challenge, even though her crazed Kookaburra singing was oddly compelling.

But her 80s hit Walking on Thin Ice is brilliant. I listened to it on the way down to the Museum of Contemporary Art on the day of the interview. I remember it was a dazzling Sydney day, and when the train hit Circular Quay and did that wonderful reveal of the harbour, I thought, as I often do, that Sydney was the most beautiful city on earth. I was unbelievably nervous, but on a high, exhilarated by the city and the challenge ahead: I’d never done anything like it before.

As I walked to the MCA, a line kept going through my head, something a guy had said at the previous night’s launch where I saw the work for the first time. The guy had a heavy German accent. “Who but a vampire would fly around the world with 100 coffins!’ he cackled maniacally.

My main memory is how nervous she was initially. She was very soft spoken. Her hands kind of fluttered in front of her mouth and sometimes it was hard to make out what she was saying. As we spoke she did relax a little, but as you would expect from someone who’s had such a hard time in the media, she was very much on guard.

The Bulletin put a lot of trust in me: I was pretty much an unknown quantity in terms of journalism. I’ll always be incredibly grateful for that. 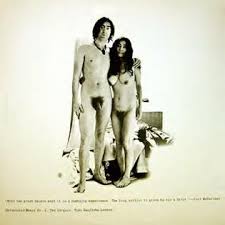 The cover from Two Virgins.